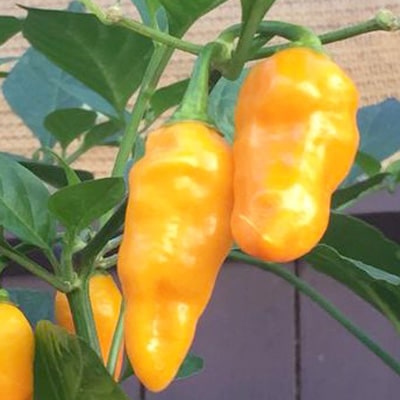 The delicious Datil packs the intense heat of a Habanero or a Scotch Bonnet, but its flavor is sweeter, more fruity, with a hint of garlic. It grows to about 3 inches long, and turns yellow-orange when mature.  The Datil likes a subtropical, humid climate with sandy soil. Most Datil peppers come from St. Augustine, FL, where they are grown commercially.  The Datil pepper can be grown almost anywhere indoors. This pepper is popular in the regional hot sauces made in Florida, as well as tasty in Datil pepper jam.

Three different stories exist about the arrival of the Datil in St. Augustine. Some say the pepper was brought to Florida by Minorcan migrants in the 18th century.  Minorca is a Mediterranean island off the coast of Spain. Others say a jelly maker from Chile brought it to Florida around 1880.  Another story is that the pepper was brought from Cuba.