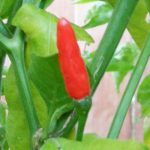 The African Bird’s Eye belongs to the Capsicum frutescens species. This means it is in the same species as the tabasco chili. This exotic, flavorful chili pepper is grown in Africa and considered to be the hottest member of the “bird” pepper family. First, we hand-pick our bird’s eye peppers. Secondly, we process the pepper while it is fresh. This preserves its unique qualities such as the aroma, flavor, heat factor and health benefits reaped from the capsicum.

Depending on the growing conditions, the Bird’s Eye plant can range in height anywhere between eighteen inches and four feet. As a general rule, the plant is naturally bushy with leaves anywhere from one and a half to three inches in length and a half inch to one inch in width. Peppers vary from one-half inch to an inch in length and taper off to a blunted point. When the pepper is immature, the pod is green and as it matures it transforms into a bright red. The African Bird’s Eye pepper and the Peri Peri, or piri piri, are the same pepper but bear different names.

For the Bird’s Eye, pungency can vary among the different varieties. Growing conditions and its environment influences the pungency as well. The Bird’s Eye, especially the Ugandan variety, is usually considered the most pungent pepper not belonging to the Chinense species. But it can measure up to 175,000 Scoville Heat Units. The German chili gardener, Harald Zosche, conducted a test to demonstrate the difference. For his experiment, he used the Malawi Birdseye variety which came from Africa and found that it measured at 112,226 on the heat scale. The same variety grown in his own garden measured only 99,579 heat units. 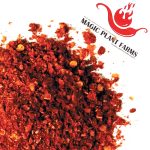 For centuries, the Bird’s Eye chili has grown wild in Africa. However, Malawi, Zimbabwe, and Uganda also cultivate it on a commercial level. Papua New Guinea, India, Chile, Mexico, and China also cultivate this popular chili pepper. The plants belong to the classification of perennials. A plant produces for three years. Then it is plowed back into the ground.

Growing the African Bird’s Eye chili can be labor intensive. This is due to the fact that they have to be picked by hand. when the pods turn red and are about ¾ inch in length, they are harvested. Usually, a plant can yield about 300 grams or 2/3 pound of fresh peppers. Each hectare, or almost 2.5 acres yields approximately 1.8 metric tons of peppers.

Various types of chili peppers are popular in different cuisines, particularly those which prefer a bit of fiery spice. Since the Bird’s Eye doesn’t carry as much heat as some other varieties, they are more widely used. They are a favorite for spicing up fish and seafood, which are staples in many areas around the globe. African Bird’s Eye adds a bit of flavor to chili con carne, tacos or nachos. It adds spice to sauces, marinades or any of the common condiments like mayonnaise or ketchup.

Medicinally, the pepper offers some benefits too. Some of the medical benefits include pain-relieving properties. It relieves pain associated with toothaches as well as arthritis. Even though it’s hot, it is also good for the digestive system. In particular, it is good for the stomach and helps relieve gas. Many times, its ground form is a key ingredient in pesticides and insect repellents. 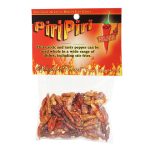 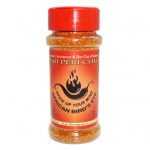