Guyanese wiri wiri chili peppers are small and resemblesa colorful cherry in appearance. But don’t let that surprise you. It is a tiny, but hot pepper. Its heat rivals that of the scotch bonnet and habanero. The Guyanese use it as a staple in their daily cuisine. They put it in everything from hot sauce to flavoring dishes and making peppered rum.

Many have tried to describe the wiri wiri as a small cherry bomb, and realistically, they are not far off. These little chilies rank between 100,000 and 350,000 in Scoville Heat Units (SHU), the scale used to rank how hot peppers are. This is the same range that some peppers known for their heat fall into. Two familiar peppers are the habanero and scotch bonnet. The wiri wiri is at the lower end of the heat scale range when compared to these two. For those who need another reference point, the wiri wiri is about 12 to 140 times hotter than the popular jalapeno pepper. 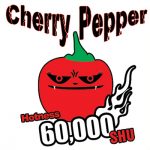 The wiri wiri may look like a cherry, but one bite will tell you otherwise. The peppers are about a half inch in width and stand upright on the plant. They sort of look like festive bulbs and have some decorative value. When peppers first appear, they are green before transitioning to yellow and finally orange. Once they are mature, they turn a vibrant red.

Their flavor is fruity, similar to the habanero or scotch bonnet. But they also have a little tomato-y tang to them which gives them a flavor all their own. This unique flavor is one of the reasons they are so popular.

The wiri wiri is a versatile pepper. Because of their unique flavor combination, they blend well with tropical fruits and tomatoes. Wiri wiri peppers add a tasty, fruity heat to savory dishes such as Indian curries. Mixed with Asian style dishes or with soy sauce they can yield very delicious results.

Wiri Wiri and the Guyanese Cuisine
To say wiri wiri chili peppers are an important part of the Guyanese cuisine is an understatement. As a staple, it is part of their everyday culture. Tables across Guyana are decked with a delicious, but spicy sauce which contains the wiri wiri and mangos. But it is also commonly used for making a pepper rum. A rum that is used to finish off soups, stews and other dishes. In Guyana, it is not uncommon to see these hot chili peppers cooked in a variety of side dishes or eaten fresh.

Check out our Wiri Wiri Products 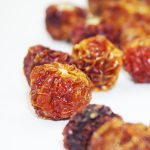 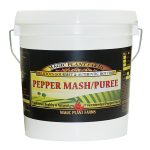