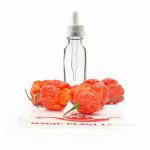 How do we know the heat range for hot chili peppers?

Wilbur Scoville was a scientist. His first goal was to find a way to measure a pepper’s heat. He was the first to identify a way to measure chili peppers heat range. This discovery occurred in 1912. First, he discovered that peppers contain Capsaicin. Then, he found that Capsaicin is the “hot” part of a pepper. It is noteworthy that he discovered this early. However, test results were not always accurate.

He originally used Organoleptic testing since it involves the senses. In initial tests,  a measured amount of Capsaicin Oil was used.  Capsaicin Oil is found in dried chili peppers.  Scoville extracted the oil from hot peppers. Then Mr. Scoville added water and sugar to the Capsaicin. This made the heat more palatable for taste testers but it also diluted the oil. But the test also had other problems.

Human tasters tested the mixture. They drank his mixture to determine the heat level.   However, this type of testing turned out to be very unreliable, since it involved taste. Everyone is different when it comes to taste preference and heat tolerance. The weakness of this test was the human tasters.  The testers tasted the same mixture. However,  the accuracy (or inaccuracy) was different between each person.  It turned out that some of the tasters were more sensitive to Capsaicin.  Therefore some tasters tolerated the heat better than others. These results skewed the early tests because of the different sensitivity levels of the testers. Fortunately, scientists stuck with the idea. They found a better way. Now testing methods are more conclusive and accurate. This is due to the removal of the human element.

Today, this heat scale system is much improved.  Electrochemistry and High Performance Liquid Chromatography  (HPLC) test the level of Capsaicin in the peppers. This yields more reliable results. While a different method is used, its name gives honor to the test’s first developer.  Today’s method is called the Scoville Scale. This name honors Wilbur Scovilles’s early attempts to determine Capsaicin levels in chili peppers.

With this HPLC testing, we accurately gauge how hot or mild a particular pepper is. This is because the actual amount of Capsaicin in each pepper is measured. The result is more accurate heat levels, howeve, it can still vary between peppers. Even between the same type of pepper. Even with these differences, it is a better way to test chili peppers heat range.

Look for the estimated Capsaicin level on pepper products you purchase.  It is good to check the label when purchasing spicy foods and hot peppers. This way, you choose chili peppers close to your heat tolerance levels. It is important to buy pepper products that are not too hot for you. However, don’t be afraid to venture out and try something new now and then. As a result of trying new things, you will discover new and interesting foods and peppers. Just like your taste preferences can change over time, so can your heat preference.

Capsaicin Types and How it Affects a Chili Peppers Heat Range

Capsaicin is not soluble in water, but is highly soluble in fats and alcohols

Look at this example of the chemical composition of Capsaicinoids. It looks complicated. But this chemical is what causes the “pain” associated with a hot pepper.

Capsaicin and Dihydrocapsaicin combined total 80-90% of the Capsaicinoids found in peppers.

Check Out Some of Our Healthy Pepper Products 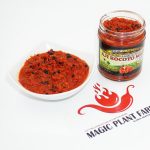 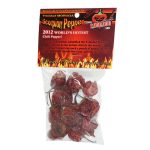