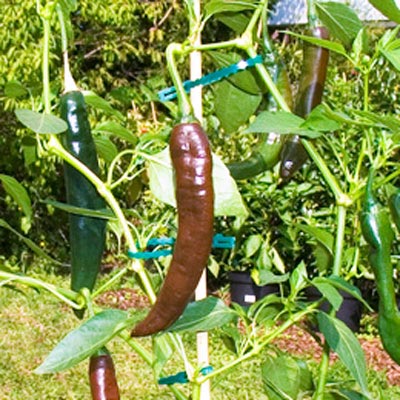 The Chilaca pepper is green when fresh and turns red as it ripens. When it is completely ripe the pepper turns brown. It is usually about 6 to 8 inches in length and has a blunt end. It is mild to medium when it comes to hotness and has a very rich and robust flavor. This pepper is typically grown and used in Central Mexico in the northwestern regions.

The name of this pepper is taken from the Nahuatl Acatl language. It can roughly be translated as “gray hair” or “old.”

The Chilaca pepper is commonly dried and then is called the Pasilla. Pasilla is dark brown in color and has a rather smoky flavor. This is one of the most common uses of the Chilaca. The dried pepper is often used in sauces but can also be ground up to make a powder. It can also be used fresh in salsas, soups and stews to which they offer a nice pungency.