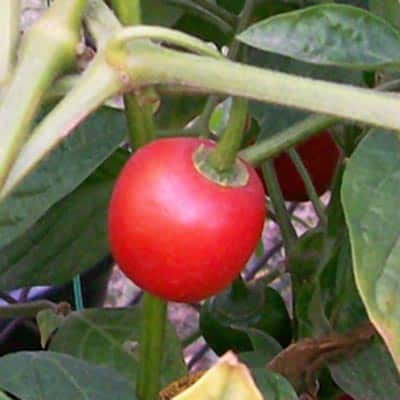 The Rocoto pepper grows at higher elevations in the Andes ranging from Colombia to Chile, as well as in the highlands of Central America and Mexico. It goes by many names including the Rocoto in Mexico, Caballo or “Horse” pepper in Guatemala. It is also known in Peru and in Mexico as the Manzano or Manzana pepper or “Apple pepper” in one variety resembling small red apples, or as Chili Perón or “Pear pepper,”  in Mexico. This pepper ripens to variety of colors.  They are also called Canario Chilies, or “Canary” peppers when referring to the yellow variety, particularly in Oaxaca. They are further known as Cera and Malinalco, or Ciruelo, as well as Cirhuleo in Querétaro, a state in central Mexico.

The Rocoto is among the oldest of domesticated Chili peppers in the western hemisphere, and was domesticated as early as 6,000 BC.  The original wild form may be extinct.  This Chili pepper plant’s size will vary widely depending on the area grown and the type of Rocoto planted.  The Rocoto can grow as small as two feet around, to as high as 15 feet tall, with a vine like appearance.

These peppers are rarely found dried, due to the thickness of the pod walls, along with a high water content, making drying difficult.  They are commonly eaten stuffed with meats and cheeses, then baked.  They are also delicious in salsas and sauces.

This apple-shape juicy & delicious pepper is the only chili with black seeds.